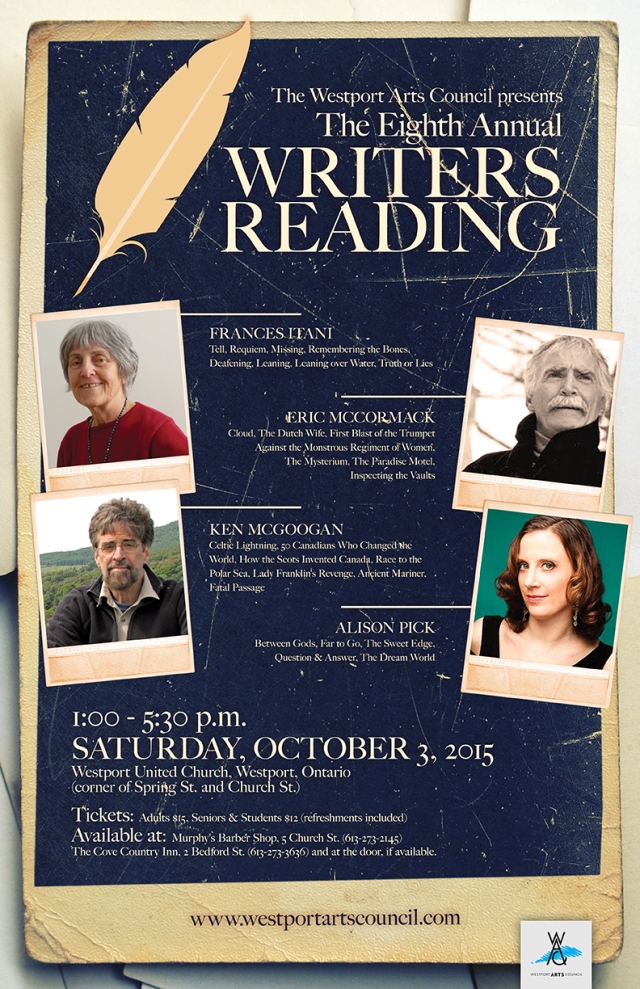 Join us for the 8th Annual Writers Reading and delve into the engaging literary world of Frances Itani, Eric McCormack, Ken McGoogan and Alison Pick. Tickets available at Murphy’s Barber Shop, The Cove Country Inn and at the door.

Frances Itani’s 2003 novel, Deafening, was an early success in a much-honoured international career that has produced 16 books, including novels, poetry, short stories and children’s books. Deafening received a Commonwealth Writer’s Prize for Best Book, and was shortlisted for the International IMPAC Dublin Literary Award and the William Saroyan International Award. It subsequently won the Kingston Reads Award, and in 2006 was selected for CBC’s ‘Canada Reads’, both English and French. It has been optioned for film and translated into some 17 languages.

Remembering the Bones, her second novel, was also an international bestseller, shortlisted for a Commonwealth Writer’s Prize. Her novel Requiem was published in Canada, U.S.A., Bulgaria, Germany and in 2012 was chosen by the Washington Post as one of the top fiction titles in the U.S. She is a double winner of the Ottawa Book Awards, and three-time winner of the CBC Literary Award. Her collection Poached Egg on Toast won the 2005 CAA Jubilee Award for best book of stories published in Canada. Her reviews, stories and essays have appeared in a wide variety of publications across North America.

Frances has been Writer-in-Residence at several universities, taught at the Banff Centre, and conducts workshops in Canada and Europe. She has lived in England, USA, Switzerland, Italy, Croatia, Germany, and has travelled extensively. She has a bachelor’s degree from the University of Alberta and a master’s from the University of New Brunswick. She studied Nursing at the Montreal General Hospital, did graduate work at McGill University and Duke University, and practised and taught Nursing for 8 years while beginning to write. She studied with both W.O. Mitchell and Rudy Wiebe.

Her latest novel Tell is set in 1919 and is a follow-up to Deafening. Tell was shortlisted for the Scotiabank Giller Prize, and was published in New York in January 2015. Frances is presently working on a new novel, continuing the storyline of Tell. She lives in Ottawa with her husband, Tetsuo (Ted) Itani, a Canadian Red Cross international consultant and volunteer.

Historian, novelist and journalist Ken McGoogan is the author of a dozen books,

the latest of which, Celtic Lightening, is due out in late September. His four groundbreaking volumes about Arctic exploration: Fatal Passage, Ancient Mariner, Lady Franklin’s Revenge, and Race to the Polar Sea, individually and collectively, received the Writers’ Trust of Canada Biography Prize, the Canadian Authors’ Association History Award, the UBC Medal for Canadian Biography, the Pierre Berton Award for Popular History, the Drainie-Taylor biography prize, and an American Christopher Award for “a work of artistic excellence that affirms the highest values of the human spirit.” He has also written three novels, and the celebrated bestsellers How the Scots Invented Canada and 50 Canadians Who Changed the World.

A university teacher and popular lecturer, Ken gives presentations across the length and breadth of Canada, including recently in the high arctic as a lecturer on board Adventure Canada sailing the Northwest Passage and northern coastal waters.

Ken holds a bachelor of journalism from Ryerson University in Toronto and a master’s degree in creative writing from the University of British Columbia. Before turning to writing books full time, Ken worked as a journalist for two decades. He teaches in the Continuing Studies program of the University of Toronto and the MFA program at King’s College, Dalhousie University, Halifax.

He lives in the Toronto Beaches with his artist-wife, Sheena Fraser McGoogan, with whom he has two adult children.

Widely celebrated for his unique imagination, novelist Eric McCormack has been described as “a master stylist” by The New York Times Book Review, and “a spellbinder, an ancient mariner with a glittering eye” by The Globe and Mail. International best-selling author (and Writers Reading participant in 2013) Andrew Pyper has described Eric’s writing as “mysterious and beguiling.”

Last year’s release of Cloud, his first novel in ten years, was anxiously awaited by an audience of international fans of his often macabre and quirky novels, including previously The Dutch Wife, First Blast of the Trumpet Against the Monstrous Regiment of Women, The Mysterium, Paradise Motel, and Inspecting the Vaults.

A finalist for the Governor General’s Award for English-language Fiction, the Commonwealth Writers’ Prize, and the People’s Prize for Fiction, Eric turned to full-time writing after retiring from a thirty-year teaching career at the University of Waterloo. Born on the outskirts of Glasgow, Scotland, Eric taught high school there before immigrating to Canada where he received a PhD from the University of Manitoba. From a boyhood in the dark days of WWII, and early exposure to the works of Robert Louis Stevenson, Sir Walter Scott, H. Rider Haggard, and other pioneers of imaginative literature, Eric naturally leans to the enigmatic, the macabre, and the unsettling, in his choice of language and themes.

Eric and his wife, Nancy McCormack, a Queen’s University law librarian, have lived in Kingston for ten years.

Alison Pick’s 2014 memoir, Between Gods, recounts her discovery of her family’s

Jewish roots in pre-WWII Czechoslovakia, and her complicated search for self-identity and love as she struggles with her wish to convert to Judaism. The CBC and the Globe and Mail included Between Gods on their Top Book of the Year list, and it was shortlisted for the BC National Award for Canadian Non-Fiction. The Toronto Star said “Pick’s writing ability and keen intellect ensure she’s able to navigate such delicate, complex subject matter with compassion and clarity.” U.S. and U.K. editions of Between Gods will be released this fall.

Alison received the 2002 Bronwen Wallace Memorial Award for Poetry, and the 2003 National Magazine Poetry Award. She holds a BA in Psychology from the University of Guelph and an MPhil from Memorial University in St. John’s. She is currently on the Faculty of the Humber School for Writers, the Banff Centre for the Arts, and the Iceland Writers Retreat.

Alison is a judge for the 2015 Scotiabank Giller Prize. She lives in Toronto with her husband, Degan Davis, and their daughter.

Books will be available for purchase (cash and credit card), courtesy of Kingston’s Novel Idea Bookstore, and signing by authors.