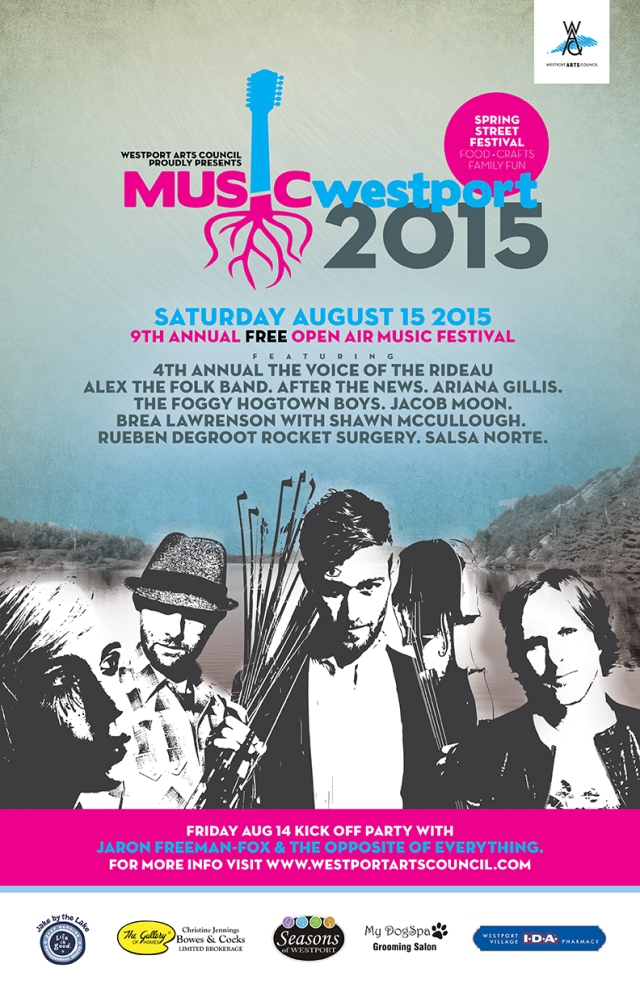 It’s the event you’ve all been waiting for! The *free* MUSICwestport Open Air Music Festival returns 15 August 2015. With 2 stages, 8 bands, the popular VOICE of the Rideau singing contest finale and the Spring Street Festival, WAC promises a full day and full range of music and entertainment for all ages.

Don’t forget to get the festival started at the Kick Off Party 14 August 2015 featuring Jaron Freeman-Fox & The Opposite of Everything. 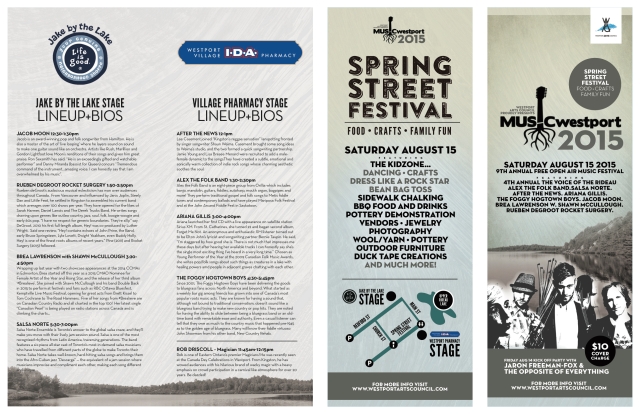 Special thanks to our annual Patrons:

Wanna be one of the cool kids? Click here to be our friend.

“The only thing better than singing is more singing.”

You said it Ella. MUSICwestport in conjunction with Brad Wing of Century 21 Real Estate is excited to announce The VOICE of the Rideau 2015 all ages singing competition. VOTR is back this summer and we’re eager to follow the music until the best amateur singer on the Rideau is crowned at the MUSICwestport open air music festival. Sing it. Win it.

Singers will compete in age categories: Adult, Youth (13-18) or Child. Along with the title, winners will be awarded a trophy and cash prize. Auditions will take place 25 July 2015 at the North Crosby Community Centre beginning at 10am. Finals will take place during the MUSICwestport open air music festival on 15 August 2015 in front of the live festival audience.

All singers must read the rules and apply for an audition by completing the form below. There are limited audition spaces, apply early or be disappointed. 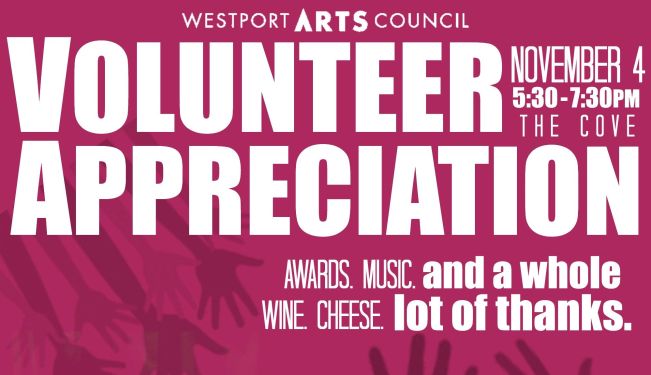 Just before the rain, there was Montreal’s Sunfields.

The MUSICwestport Open Air Festival showcased 8 bands on two stages and hosted visitors from the Philippines, Germany, France, New York, Boston, all across Canada and, of course, many proud locals.

The festival actually kicked off the night before at The Cove with a special performance from Montreal’s H’SAO to a sold out crowd. The award-winning African group set an energetic tone for the weekend with their enticing choreography and alluring vocal harmonies.

The morning started off in mother nature’s good graces as the sun shone for the finals of the VOICE of the Rideau singing competition where winners Stephanie Doornekamp, Luke Young, Madison Miernik and Jillian Texeira were crowed in their respective age categories.

Taking to The Cove stage sponsored by Jake By The Lake next was the crowd favourite of the weekend: Bob Burtch Bluegrass Band. The Canadian mandolin legend and his band played classic bluegrass under the sun while on the Artemesia Spring Street stage a few blocks over Mikey and The Reelers entertained crowds with their hilarious, high energy rock and roll.

In between the two stages, crowds were also treated to the ever-growing Spring Street Fair showcasing localartists and family friendly activities, including entertainment from interactive puppeteers. The live pottery demonstration was popular with the crowd, as was the return of the WAC bean bag toss challenge. 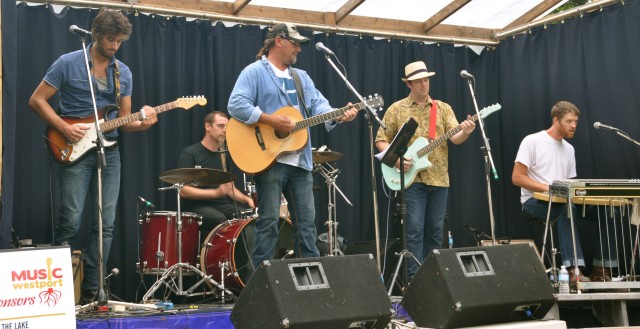 Hot electric jazz from Kevin Warren East West Project followed on Spring Street while, last minute additions to the line-up, Sunfields rocked The Cove stage with their quirky rock and catchy lyrics. As the dark clouds began to gather overhead, Drumhand‘s hypnotizing mix of Brazilian, African, Cuban and Indian rhythms kept the crowds entranced despite the drizzle but when the rain started to really pour audiences and bands alike began scattered to find shelter. A mass group effort from volunteers (including members of Sunfields, thanks guys!) helped move artists, amps, and audiences to alternate venues.

Plan B: Alex the Folk Band at Church Street Bakery.

For the first time in its eight year history, MUSICwestport continued indoors but no one missed a beat.

Crowded into the inviting Church Street Bakery with warm tea and cookies, Alex the Folk Band kept the music going while a drenched Miss Emily and her loyal listeners set up inside The Cove. For the first time in its eight year history, MUSICwestport proceeded indoors but no one seemed to miss a beat. The festival day closed with the building sounds of New Country Rehab who ended the day on energetic musical high.

Thanks goes out to all the rain-soaked volunteers who worked like a well-oiled machine to move artists and amps alike into dryer locations and the spectators who followed the music. Special thanks to all of our generous sponsors who made the festival possible and continue to believe in the arts and WAC.

All donations collected over the weekend will go towards the WAC youth initiative to bring artists of all mediums into our local schools. 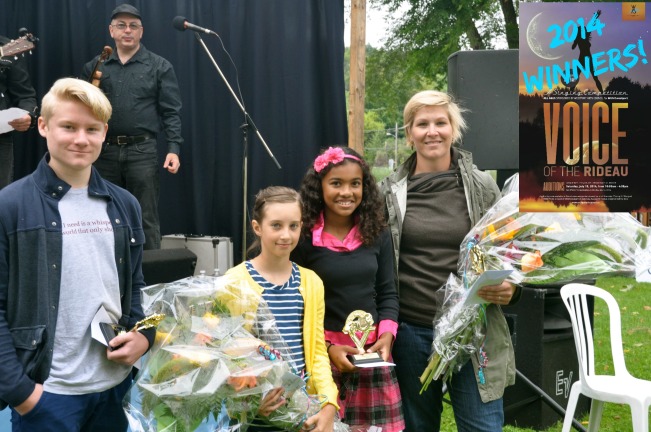 Our winners each won a cash prize, beautiful flowers courtesy of Hidden Garden Floral Design and, of course, the title of VOICE of the Rideau…plus the bragging rights that go along with it!

After rounds of auditions, ten singers battled it out at the final round of the VOICE of the Rideau all ages singing competition. With 4 contestants from the child category and three in each the youth and adult categories, the talent on stage was both inspiring and fierce. The finals served as the opening act of the MUSICwestport Open Air Music Festival so singers made their final performances, not only in front of the WAC panel of judges, but also in front of a live audience. After fantastic performances from all competitors, WAC would like to congratulate the winners of the 2014 edition:

Warm thanks goes out to all competitors who braved the stage, our panel of judges, and all those who came to support the final showdown. 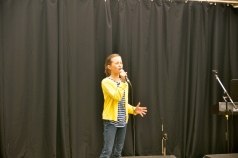 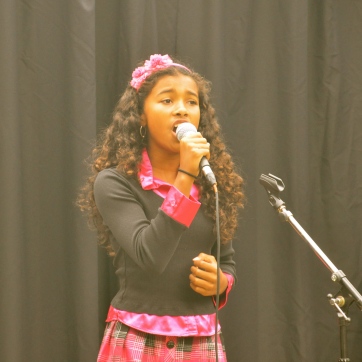